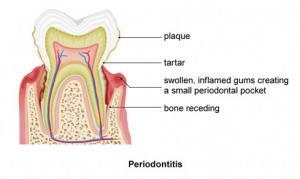 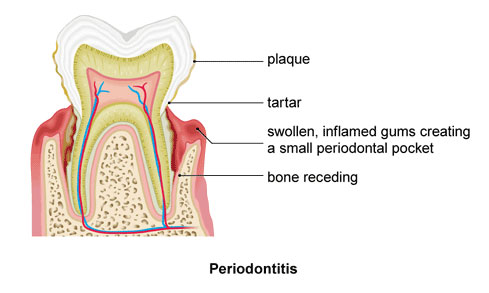 In the common dental problem known as periodontitis, various microbes play a critical role in the disease processes that damage the pulp and other tooth structures. The light-based therapy known as photodynamic therapy (PDT) has emerged as a promising treatment for this inflammatory disease of the gums.  Such an approach is urgently needed in order to avoid using antibiotics for treating dental infections that often display a high degree of antibiotic resistance.

The use of PDT has gone by various names, including antimicrobial PDT, photochemotherapy and  photoactivated disinfection.  Though the specific goal is to decontaminate the root canal system, the underlying principle is the same as for all PDT applications.  First, a nontoxic photosensitizing agent is selected that is readily taken up by the bacteria.  The next step involves exposure to oxygen and a specific light source (e.g., a lower-power lasers such as diode and helium-neon laser) triggers a reaction capable of generating highly reactive oxygen species that can destroy the microbes.

Scientists at Brazil’s Federal University of Pernambuco recently reviewed evidence showing that PDT enhances the effectiveness of conventional treatments for eliminating bacteria that persist in the root canals. “Due to its selective antimicrobial action, PDT appears as a promising therapy to eradicate pathogenic bacteria, since, in low concentrations, it kills microorganisms without causing injury to human normal cells,” the authors state in the July 2014 European Journal of Dentistry.

Other advantages cited in the review included the following: (1) PDT hinders the development of microbial resistance; (2) the procedure can be repeated several times, without producing cumulative side effects; and (3) the treatment is able to completely remove any microbes that remain in the root canal following conventional treatment, which typically consists of the dental technique known as scaling and root planing.

Getting to the Root:  Bremachlorin Shows Promise

Clinical studies will continue to provide important insights into the potential therapeutic benefits of PDT for people with periodontal disease. An example of this comes from the University of Ljubljana in Ljubljana, Slovenia. This study sought to compare the efficacy of the conventional treatment (subgingival ultrasonic scaling, along with scaling and root planing) alone to the same treatment followed by repeated antimicrobial PDT.

This study enrolled 27 non-smoking patients with chronic periodontitis and residual pockets that measured at least 4 millimeters deep and bleeding upon probing. The researchers were able to detect the presence of five periodontal pathogens in the pockets. After one year, all three treatments resulted in a significant clinical improvement. Nevertheless, PDT also showed some definite advantages.

To begin with, the additional application of PDT resulted in a substantially greater reduction of bleeding upon probing at both three months and 12 months when compared to the standard treatments alone. Moreover, PDT reduced the proportion of various infectious microbes in deep pockets when compared to standard treatment, as reported online ahead-of-print in the 24 July 2014 issue of Lasers in Medical Science.

As if echoing the latter finding, the same medical journal also reported on a study out of the Laser Research Center of Dentistry at Tehran University of Medical Sciences in Tehran, Iran. The bacterium known as A. actinomycetemcomitans is one of the microbes most strongly linked with aggressive periodontitis. This study exposed 84 samples of bacterial suspensions to different PDT configurations that involved different photosensitizers and light treatments.  One of these photosensitizers was an agent known in the European Union as Bremachlorin®.

The Tehran University study found that Bremachlorin-PDT with laser light led to a significant decrease in the concentration of A. actinomycetemcomitans, and this strategy was more effective than that of the other PDT treatment protocol, which used Toluidine blue as the photosensitizer along with a light-emitting diode. Thus, Bremachlorin-PDT may hold considerable promise for the eradication of the main infections that drive the development and progression of periodontal disease. Clinical studies are now needed to test this hypothesis.