The above illustration depicts the range of human infections that have been clinically treated with PDT.   As you can see, antimicrobial PDT  has many potential applications. In recent years, this approach has made a strong comeback as a possible way to eliminate multidrug-resistant infections.  At the present time, there are no known situations in which microbes have become resistant to antimicrobial PDT despite numerous attempts to induce resistance in laboratory studies.

The idea of using a pill to eliminate the infection seemed vastly simpler and far more attractive on practical grounds to that of a light-based therapy. In the 1970s, studies of antimicrobial PDT resumed and seemed to hold real promise for the treatment of viral infections. Nevertheless, this practice ceased when a paper in the prestigious New England Journal of Medicine claimed that the procedure was largely ineffective. Some doctors also raised the erroneous concern that the use of light could somehow cause cancer.

Thus, despite its discovery over a century ago, progress in the field of antimicrobial PDT has been very gradual. With the steady spread of antibiotic resistance throughout the world, there has been renewed interest in the possibility of using antimicrobial PDT, also known as photodynamic inactivation (PDI). It is understood that antibiotics and other antimicrobial drugs have a very limited future, and that reasonable alternatives are urgently needed. 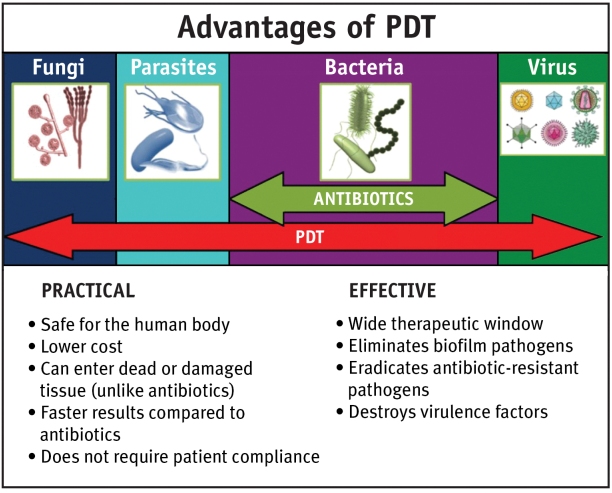