For the treatment of malignant tumors, photodynamic therapy (PDT) is sometimes more effective than conventional therapy and can work as well as surgery or radiation therapy in treating a wide range of cancers.  PDT performed with second-generation photosensitizers can be effective against the following tumors, sometimes in conjunction with standard treatments depending on the specific factors such as tumor size, type and location. The effectiveness of PDT also extends to the treatment of benign tumors and many pre-cancerous conditions. 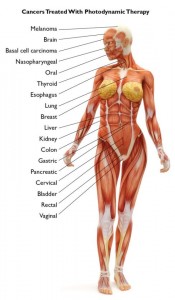 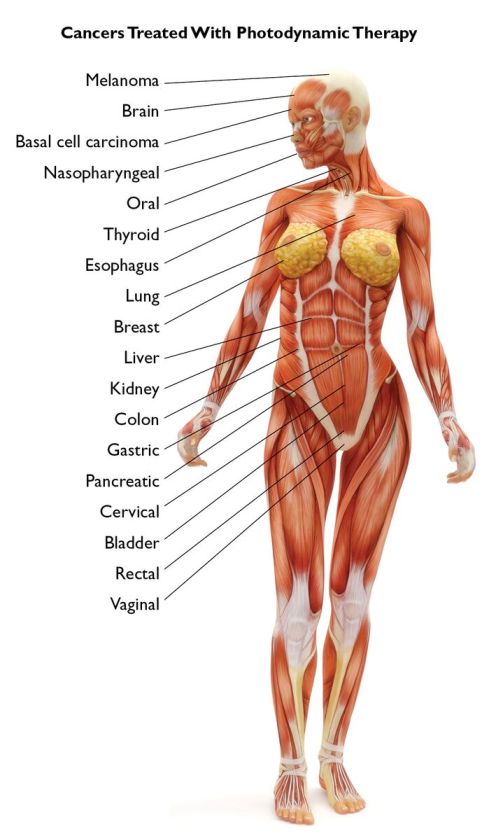 Photodynamic treatments for cancer all have at least two elements in common. The first is the use of a specific light source, such as a laser, infrared light, ultraviolet lamp, or LEDs (light-emitting diodes). The second is the use of a photosensitizer that becomes selectively concentrated in the mutated or malignant cells. This occurs with minimal if any effects on normal, healthy cells. In the presence of light and oxygen, a reaction is triggered inside the malignant cells, ultimately causing damage and the eventual destruction of the cancer.

The light-based approach already has proved effective against several cancers for which conventional treatment has largely failed. Many other cancers have also responded well to photodynamic therapy (PDT), as indicated in the diagram on this page. Because cancerous tissues are selectively targeted while normal tissues are largely spared, PDT is able to eradicate cancer while being virtually free of toxic side effects.

This represents a dramatic contrast with modern chemotherapy and radiation treatments. With chemotherapy, for example, cancer patients often suffer even more from the toxic side effects of the drugs than from the disease itself. It is an added burden that can greatly compromise one’s quality of life, ultimately limiting the ability to maintain good health and immunity.

Another major benefit of this light-based approach is that the immune system is activated in highly specific ways to recognize the presence of cancer. In addition, the immune system now becomes active against this disease, providing an indirect way to eliminate the abnormal cells—including metastases or residual cells that may be left over after the more direct lines of attack are tried. By clearing the body of cancer, this approach can help stave off the return of more aggressive disease later on.