Among the cancers that exhibit a strong capacity for chemoresistance is head and neck cancer (HNC). As the name suggests, this cancer involves tumors arising in the mucosal linings of the mouth, nose, and throat region. HNC currently ranks fifth in incidence among all cancer types worldwide, with more than half a million new cases each year. Men are about three times more likely to be diagnosed than women.

Head and neck tumors may spread to the area around the tumor—something oncologists refer to as locally advanced disease—but most do not metastasize or spread to other parts of the body. About two out of every three patients with head and neck cancers are diagnosed with locally advanced disease. In these unfortunate cases, recurrence rates are very high, and the five-year life expectancy is only about 50%.

Head and neck tumors are feared mainly because they can limit a person’s ability to eat, drink, talk and breathe, and because the benefits of conventional treatment often seem short-lived. The precise choice of treatment will depend on the type, location, and stage of HNC, and the treatment plan may include various combinations of surgery, radiotherapy, and chemotherapy.

When Chemoradiation Becomes Too Toxic

For locally advanced cases of HNC, the combined use of radiotherapy and chemotherapy—also known as chemoradiation—is almost always the preferred treatment strategy. Recent developments in diagnostic imaging techniques have helped to identify those advanced HNC cases for whom surgery alone is insufficient, and for whom chemoradiation is deemed necessary.

Nevertheless, the use of chemoradiation has been linked with an unacceptably high mortality and morbidity rates.  For example, the chemo drugs typically cause neurotoxicity (nerve damage) in the hands and feet.  In addition, chemoradiation for advanced HNC can damage the thyroid gland, resulting in hypothyroidism. Thus, the treatments are not only costly, but obviously can have a severe impact on one’s quality of life.

Despite recent advances in treatment, the prognosis for most HNC patients remains dismal. New strategies are urgently needed to bypass chemoresistance, to bolster the tumor-killing effects of chemoradiation, and to diminish the need for this treatment or reduce its toxic side effects. Over the past decade, a number of studies have demonstrated some encouraging clinical outcomes for the use of

The Promise of PDT for Head and Neck Cancer

In the past three decades, PDT has attracted more and more interest from the medical community as a way to treat head and neck tumors. This approach entails the use of a photosensitizer, an agent that absorbs and transmits light’s energy in order to destroy abnormal or diseased cells. The combination of light and oxygen enables the photosensitizer to play a major role in the treatment of malignant or benign diseases.

Photodynamic treatments offer substantial advantages over radiotherapy as well as chemoradiation treatments for HNC. Unlike radiotherapy, PDT’s mechanism for tumor destruction does not depend on DNA damage. This decreases the likelihood of treatment resistance (as well as cross-resistance with chemotherapy) and also eliminates the chance of delayed adverse effects, such as developing a second cancer ( a very real risk with chemoradiation).

As you can see, the use of photomedicine presents a number of possibilities for improving survival and quality of life in these patients. Although multiple rounds of PDT are often needed, the side effects are much less severe than those observed with the three conventional treatments—surgery, radiotherapy, and chemotherapy.

PDT has demonstrated some key advantages over the conventional treatment of HNC—beginning with the ability to help preserve normal tissue, as well as the vital functions of speech and swallowing. Moreover, PDT can eliminate tumors that are resistant to chemoradiation strategies—again, an all-too-common problem with recurrent HNC cases. 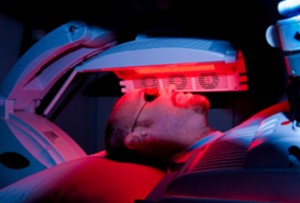 Treatments for advanced HNC (specifically those classified as squamous cell carcinomas) have evolved considerably in the past decade. Minimally invasive, image-guided surgery has been developed, as have protocols for chemoradiation. But for those patients who are considered to be unsuitable for the therapeutic options listed above, PDT can be offered as a reasonable and effective treatment option.

Two photosensitizers in particular have been evaluated in some depth in these patients. The first is the porphyrin-based agent, Photofrin, and the second is Foscan, a second-generation photsensitizer that provides a more potent treatment effect because it entails lower light dose and produces less phototoxoicity (skin sensitivity to light after treatment).

At the present time, Foscan-PDT has been approved in the European Union for the palliative treatment of advanced HNC (again, the squamous cell carcinoma type) as well as for curative treatment of early-stage HNC. Unfortunately, no studies have yet compared Foscan-based PDT with other PDT regimens or with other treatment modalities in patients diagnosed with these tumors.

As of 2010, over 1500 patients suffering from primary, recurrent or metastatic HNC tumors had been treated with PDT, and two large multicenter European studies were dedicated to assessing PDT using Foscan for the treatment of early-stage oral cancers. PDT was shown to achieve overall response rates of up to 91%, and cure rates of up to 89%—easily matching the best results of conventional treatment for early-stage tumors, as reported online ahead-of-print in the 7 January 2015 issue of Lasers in Medical Science.

At this point, PDT appears to be particularly efficient in treating cancers of the mouth and throat (oral and laryngeal carcinomas, respectively), according to reseachers at the University of Lorraine in Nancy, France. For cases of advanced incurable HNC, the Nancy scientists identified clinical evidence that PDT resulted in significantly improved survival and quality of life in patients who had a complete response when compared with routine disease management practices.

Taking into account all the published clinical studies of PDT for head and neck tumors, the Nancy research team concluded that Foscan-PDT produces a satisfying response rate, a reduction in long-term morbidity, good cosmetic results, and lack of interference with any subsequent treament modalities. Despite these advantages, clinical PDT for HNC continues to lag behind other anti-cancer applications of this amazing light-based therapy.

Looking to the Future: The Prospects for Nano-PDT

What will it take for PDT to become accepted as a standard treatment option for the treatment of head and neck tumors? A key focus for photomedicine scientists will be to improve the selectivity of the photosensitizers for the tumor. This is considered to be the main research challenge, and recent studies indicate that it can be accomplished using nanotechnology (manipulation of individual atoms and molecules). The nanotech approach is revolutionizing many aspects of medicine, including the way that drugs are taken up by living cells and tissues.

A new generation of light-sensitizing nanoparticles has undergone rapid development. Nanotechnology researchers from Taiwan’s Chung Yuan Christian University recently teamed up with the University of North Carolina’s Eshelman School of Pharmacy in Chapel Hill (USA) to study the effects of nano-based PDT on squamous cell carcinoma cells. They found that lipid-based nanoparticles for RNA resulted in a great tumor-shrinking effect of PDT—an approximate 40% decrease in tumor size after 10 days. The combination therapy was found to be much more effective than either PDT or the nanoparticles alone, as reported in the 1 April 2015 issue of Cancer Letters.

Meanwhile, studies at the University of Chicago (USA) indicate that nanoparticles carrying both cisplatin and a photosensitizer may result in synergisms between chemotherapy and PDT. In laboratory studies, this combination synergistically triggered the killing of cancer cells and resulted in an 83% improvement in tumor regressions for human head and neck tumors that were resistant to cisplatin chemotherapy, as reported in the 27 January 2015 issue of ACS Nano.

Porphyrins are a group of substances that serve as some of the most potent photosensitizers in the realm of photomedicine. Nanoscale porphyrin-based photosensitizers may serve as an exceptionally effective vehicle for providing PDT of resistant head and neck tumors, according to the Chicago researchers. They contend that this represents a “new class of highly potent PDT agents and hold great promise in treating resistant cancers in the clinic,” as reported in the 3 December 2014 Journal of the American Chemcial Society.