Cervical cancer and endometrial cancer are roughly tied as the seventh leading cause of cancer-related deaths among women in Western Europe and North America. Moreover, women diagnosed with either cancer often face a strong possibility of losing their ability to bear children due to the effects of surgery and other conventional treatments.

Women under age 45 tend to be diagnosed with a less aggressive early-stage form of endometrial cancer, and their prognosis tends to be more favorable compared to that of older women. Along the same lines, a favorable prognosis generally applies to younger women with low-grade, early-stage cervical cancer.

Given the better outcomes associated with these early-stage cancers in younger women, medical researchers are increasingly interested in more conservative treatment strategies for bolstering survival. The goal is not only to extend life, but also to improve the quality of life and hopefully preserve fertility in the process. These goals become all the more important as an increasing number of women have chosen to delay childbearing until later in life.

Today’s statistics speak for themselves: One out of 12 women is expected to give birth after age 35, compared with only one out of 100 women in 1970. For these reasons, many women may feel averse to the usual surgical treatments for these female cancers. Fertility-sparing options for treatment and management have become a major focus of research.

Photodynamic therapy, or PDT, is among the more innovative options now under consideration. This treatment works through the interaction of light, oxygen, and the photosensitizing agent. This combination results in the generation of highly reactive oxygen molecules, which in turn can bring about the eventual destruction of the cancer.

Initial studies of PDT for these gynecologic cancers have yielded some promising results. As you will see, PDT can help preserve fertility depending on the specific treatment situation. In most cases, it will mainly be sought in women with low-grade, early-stage tumors of either the cervix or endometrium.

Hope for Childbearing After Endometrial Cancer

Endometrial cancer is the most common gynecologic malignancy in Europe, the United States, and other developed countries. Though it mainly affects postmenopausal women, as many as one in every four women will be diagnosed before menopause. The standard treatment (removal of both the uterus and ovaries) means that these women must suffer the loss of their reproductive potential.

For some women with endometrial cancer, conservative treatment with certain hormones (progestins) has been shown to be a feasible and safe fertility-sparing approach. PDT, along with limited surgery, recently has been cited as an alternative approach to progestin therapy alone, though the data are limited.

Researchers at the Comprehensive Gynecologic Cancer Center at South Korea’s CHA University recently reported on a case of PDT for low-grade endometrial sarcoma. The case involved a 31-year-old woman who was diagnosed with this rare cancer following the surgical removal of a cervical polyp. She underwent fertility-sparing surgery together with PDT on the endometrium and uterine cervix. She also received treatment with an anti-estrogen drug after the PDT.

This woman was able to conceive via in vitro fertilization and delivered twins by Cesarean section nearly four years after the integrative PDT treatment. After over eight years of follow-up observation, she had no evidence of recurrence. These findings were reported online ahead-of-print in the 11 August 2014 issue of Photodiagnosis and Photodynamic Therapy.

The researchers concluded that conservative surgery combined with PDT may be a successful fertility-sparing approach over the long term. Whether this integrative approach could be effective in other endometrial cancer situations—especially for select younger patients who want to preserve fertility—remains to be determined by clinical trials. 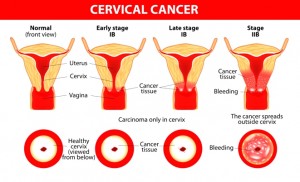 There is also hope for women with early-stage cervical cancer who may want to get pregnant and have children. Many women in this situation will try to have a vaginal radical trachelectomy (VRT). This surgery involves removing all of the cancer while sparing the internal opening of the cervix. The surgeon then stitches up that opening, leaving a smaller opening to allow for menstrual flow. The stitch is designed to support a pregnancy until a baby can be born via Caesarean section.

Although VRT is the standard fertility-preserving strategy for early-stage cervical cancer, it does have some limitations. The main concern is that the surgery will result in a high rate of complications following the procedure. The most frequent complications have included bladder problems, lymph fluid accumulations, and swelling of the vulva.

Following VRT, some women also may experience irregular menstrual bleeding or even become infertile. Statistics show that VRT results in a mildly reduced risk of conceiving and a greater risk of premature delivery. Many oncologists now regard the treatment as too aggressive as a fertility-sparing option for early-stage cervical cancer.

Another popular technique, known as loop electrosurgical excision procedure (LEEP), involves the use of a thin, low-voltage electrified wire loop to cut out abnormal tissue in the cervix—rather than destroying the abnormal cells. This is often done in conjunction with cone biopsy or conization, which involves removal of a larger area of the cervix in the shape of a cone.

Earlier this year, the same CHA University research team (mentioned in the above discussion on endometrial cancer) tried combining PDT with either conization or LEEP. The objective was to see whether this could serve as a less radical fertility-preserving treatment option for early-stage cervical cancer patients. The researchers analyzed data of 21 patients with early stage cervical cancer (stages IA-IIA) who had undergone the combined treatment approach from 2003 to 2012.

Either LEEP or conization was performed prior to PDT in every case. Of the 13 women who attempted to get pregnant, 10 (77%) women conceived a total of 11 pregnancies. Of these pregnancies, seven (70%) reached the third trimester, of which five delivered to term. No cancer-related deaths or PDT-related adverse effects were obserrved.

The authors propose that PDT combined with LEEP or conization could be an effective fertility-sparing treatment for young patients with early stage cervical cancer, as reported in the September 2014 issue of Photodiagnosis and Photodynamic Therapy.

The ideal photosensitizing agent is taken up easily by cancer cells and retained within the tumor while being excreted fairly quickly by normal tissues. When the concentration of the agent is much higher in malignant than in normal tissues, this can result in the highly targeted destruction of the tumor, with virtually no side effects.

Scientists also have been interested in ways to help guide the photosensitizing agent toward the target tissue, most often a malignant tumor. A recent example of these efforts entailed combining the photosensitizer with the B vitamin, folic acid. Scientists at the Third Military Medical University in Sichuan, China, used a chlorin-based photosensitizer with “folic acid as a tumor‑targeting warhead”. When folic acid was linked up with the photosensensitizer, the agent’s concentration in the cervical tumor tissue was more than double that of the same agent without folic acid, as reported in the January 2015 issue of Oncology Reports.

Current treatments for advanced cervical cancer involve the chemotherapy drug, cisplatin. However, this drug has severe toxic side effects, such as damage to the kidneys and nervous system.  One way to reduce treatment-related toxicity is to lower the dose of the drug by combining it with other treatment modalities.  PDT is one possibility in this regard.

Scientists at Sao Paulo State University (Brazil) recently demonstrated that PDT can synergize with cisplatin in killing cervical cancer cells. PDT by itself was actually more effective than the chemotherapy, but the combination of these two treatments had the greatest anti-cancer effect. The synergy implies that lower, less toxic doses of cisplatin could be tried with the PDT in order to enhance the overall treatment effect.

Lastly, the Sao Paulo research team observed that different sequencing of the PDT with cisplatin—that is, giving PDT either before or after chemotherapy—was very important for achieving the synergistic result. Different sequences were needed depending on the photosensitizer. This suggests that researchers who wish to combine these treatments will need to focus more on the sequencing of treatments in order to enhance the tumor-killing effect, as reported online in the 7 September 2014 Journal of Photochemistry & Photobiology-B.

Some photosensitizers are capable of attacking the cancer from multiple angles. The Natural Health Foundation (NHF) has supported a number of studies of a patented photoactive agent called Bremachlorin®. This agent is now undergoing intensive study in the Netherlands with the goal of achieving clinical acceptance in the European Union.

Research at Leiden University Medical Center and Erasmus University Medical Center (Rotterdam, the Netherlands) indicates that Bremachlorin’s high level of therapeutic efficacy as a component of PDT for cancer is related to its ability to enter living cells with ease, as well as to accumulate far more strongly in tumors compared to healthy tissues.

In addition, Bremachlorin® is able to target different aspects of cancer biology:

The combination of these three effects helps account for Bremachlorin-PDT’s unique tumor-killing potential. The Leiden-Erasmus researchers published their findings on Bremachlorin-PDT in the January 2014 Journal of Biomedical Optics and also in the March 2014 issue of Lasers in Surgery and Medicine.