A drug successfully used in cancer therapy in Russia is now garnering serious attention in the Netherlands, with the latest study illuminating a breakthrough for the treatment of advanced cancers.

Cancer cells have often been compared to terrorists. Like metastases, they spread out and hide away in small groups. And just as terrorists use fake passports and find other ways to conceal their true identities, cancer cells are often outside the immune system’s radar. We tend to assume that the immune system can readily distinguish between terrorist and non-terrorist, malignant and non-malignant, but this is not the case. More often than not, the immune system remains “tolerant” toward cancer cells, even as those same cells multiply out of control to spawn tumors and metastases. 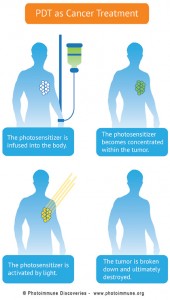 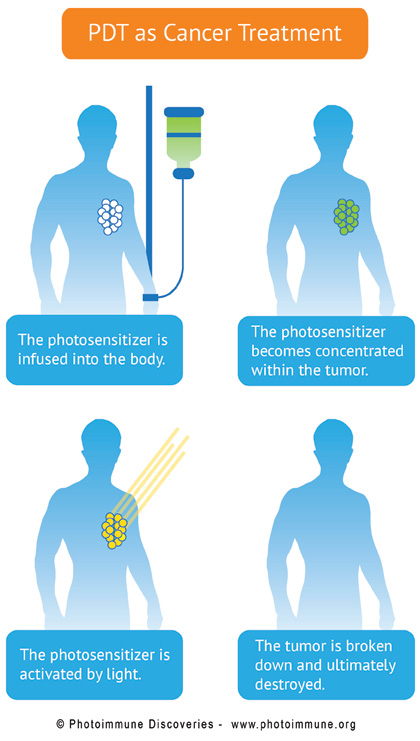 But now a new approach to cancer treatment seems to have overcome this limitation. The approach, known as Bremachlorin-mediated photodynamic therapy, or Bremachlorin-PDT, specifically damages and destroys the primary tumor while at the same time activating the immune system to clear away deadly metastases. The secret ingredient is Bremachlorin, a non-toxic, chlorophyll-derived agent that captures and then harnesses light’s energy in order to destroy tumors and purge the body of remaining cancer cells.

The value of this photoimmune approach is underscored by the findings from a landmark study published on 9 November 2015 in the peer-reviewed medical journal, Clinical Cancer Research. The study was spearheaded by Drs. Ferry Ossendorp and Jan Willem Kleinovink of the Department of Immunohematology and Blood Transfusion at Leiden University Medical Center in the Netherlands.

The Leiden research team was initially interested in the various immune system effects of Bremachlorin-PDT after the treatment of established tumors. In this case, the tumors were of two kinds: aggressive lymphomas and aggressive cervical tumors. The study found that Bremachlorin-PDT by itself resulted in a significant slowing of tumor growth in all the laboratory animals. Thus, it appears that PDT has the potential to extend life, even with aggressive cancers for which the chances of survival are quite poor.

The PDT was then combined with a peptide-based immunotherapy strategy known as the synthetic long peptide (SLP) vaccine, which is very effective in activating the T-cell system against cancer. With this combination strategy, one-third of the test subjects were completely cured of cancer, meaning that the disease totally disappeared—and without the use of any surgery or toxic drugs!

Amazingly, all of the cured mice in the study were fully protected against the subsequent development of cancer. Neither the aggressive lymphomas nor the aggressive cervical tumors were able to grow again. In essence, a true “cure” had been achieved, because the immune system had been fully programmed to deter new cancer growth. Whereas most cancers can eventually return as a deadly relapse, this treatment had offered bulletproof protection against such an event. (As an aside, cancer survival in humans is typically measured as five years from the time of diagnosis. The ideal approach would extend this survival to the indefinite future, and the combined immuno-PDT strategy could make such an outcome more likely.)

In addition, the combination treatment of primary tumors led to the complete eradication of distant secondary tumors, or metastases. In other words, the very situation that usually kills people—metastatic disease—appeared to be resolved by this elegant light-based strategy. In the traditional oncology setting, metastases are treated with toxic chemotherapy drugs that greatly weaken the immune system and almost always fail to completely eradicate the disease.  (Note: The LUMC study used experimental models designed to mimic the clinical situation of a large primary tumor with smaller metastases.)

“We show that immunotherapy can be efficiently combined with PDT to eradicate established tumors, based on strong local tumor [removal] and the induction of a robust systemic immune response,” the Leiden group reports. They add that the combination of active immunotherapy with Bremachloin-PDT offers “a feasible novel treatment strategy for advanced cancer.”

Due to the effects of chemotherapy and radiotherapy, many cancer patients have severely weakened and suppressed immune systems by the time they undergo treatment with PDT. For this reason, certain immunotherapy strategies, such as T cell checkpoint blocking antibodies, could be essential to realizing the maximum benefit of PDT.

Impressively, the Leiden researchers also report that “the application of [this] combination therapy… may theoretically be extended to virtually any type of cancer.” Along these lines, recent clinical studies focusing on Bremachlorin-PDT for lung cancer, bile duct tumors, bladder cancer, and stomach cancer have shown highly favorable results. These same cancers have been successfully treated in Russia using Bremachlorin-PDT.

The Leiden group chose Bremachlorin because of its unique ability to selectively target and penetrate more deeply into tumors, in addition to destroying the tumor’s blood supply and enabling the immune system to better eliminate any remaining cancer cells.

At this time, Bremachlorin® is approved for clinical use in Russia under the name Radachlorin®. This medicine also has conditional approval in South Korea, and preclinical studies are under way in the Netherlands with a goal toward achieving clinical acceptance and market authorization. The average randomized clinical trial—the gold standard method for testing a new drug or treatment—costs a small fortune and moreover may take years to complete. Meanwhile, patients with advanced cancer are clamoring for more effective treatments.

Given that Bremachlorin has been an established clinical medicine in Russia for nearly a decade, and given the success of Bremachlorin-PDT as a cancer therapy in that country, it seems a pity that costly, time-consuming randomized clinical trials are now required before the drug can be made available to cancer patients in the European Union. Randomized trials have their merits, obviously, but imagine being a patient with advanced cancer, then having the added stress of being randomly assigned to a group that does not offer this humane, potentially life-saving treatment.

One possibility being explored at this time is that patients with advanced cancers may be granted access to Bremachlorin-PDT on a “compassionate use” basis, when the physician determines that mainstream treatment methods are not likely to confer a favorable survival advantage and quality of life. It is within this “compassionate use” setting that the photosensitizer Bremachlorin could soon become the medicine of choice for advanced malignancies that continue to defy the best efforts of modern oncology. Because the medicine is nontoxic and thus free of adverse side effects, it is difficult to understand why patients should be denied access to what appears to be a critical piece in the cancer treatment puzzle.

To show your support download the Photoimmune Discoveries banner. This banner can be used in your email as a signature or on social media networks. Right click and save this banner to show us your support.