Malignant conditions of the skin are the most common form of cancer worldwide.  For example, in most of Europe and North America, skin cancer accounts for about one in every three cases of cancer.  Even so, skin cancer isn’t a serious concern for many people, probably because death rates are relatively low when compared to other types of cancer.  Nonetheless, even non-lethal skin conditions should be treated, and treatment always comes at a cost.  Recent studies have been aimed at finding the best treatments as well as assessing the true costs of these treatments. 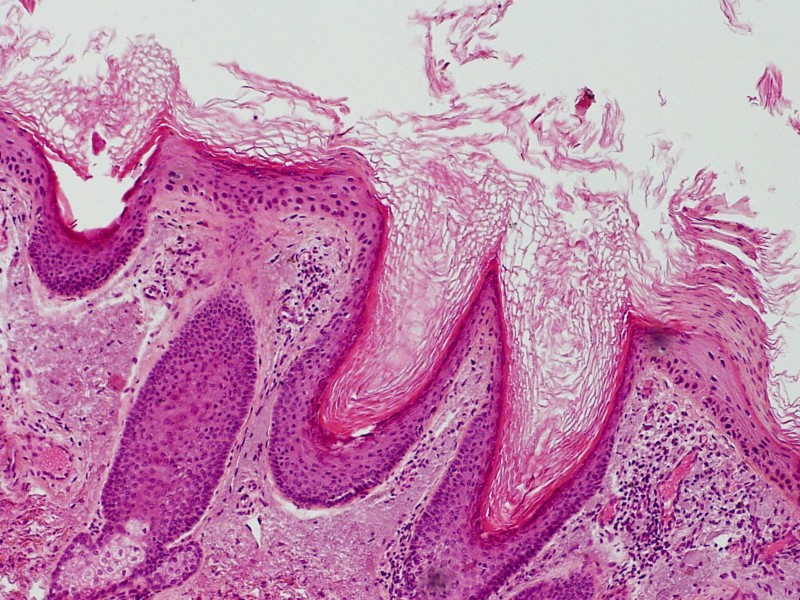 Actinic keratosis under the microscope. Photograph by LWozniak&KWZielinski, via Wikimedia Commons.

At the present time, photodynamic therapy (PDT) and the immune therapy known as topical imiquimod immunotherapy (also called imiquimod cream) are recommended as effective treatment options for AK.  In order to compare the efficacy and safety of PDT versus imiquimod in the prevention of new non-melanoma skin cancers, researchers at the Aristotle University in Thessaloniki, Greece, randomly assigned 44 patients who had actinic damage on the face or scalp to receive PDT on one side, and imiquimod on the other.  The primary outcome was the number of new lesions on the treated areas during a 12-month follow-up period.

Both treatments produced equivalent results—there was no statistically significant difference in terms of development of new non-melanoma skin cancers at any point of the follow-up period.  Moreover, both treatment regimens were safe and well tolerated, though PDT has a far better track record in terms of tolerance. The patients in this study reported a personal preference for PDT instead of imiquimod, as reported online ahead-of-print in the 23 April 2014 Journal of the European Academy of Dermatology and Venereology.

New Light on the Most Common Cancer

Tens of millions of fair-haired, light-skinned, light-eyed people are affected each year by basal cell carcinoma (BCC), the single most common cancer in the world.  These individuals regularly seek treatment from dermatologists and primary care physicians, and as you might imagine, they have many treatments from which to choose.

Based on evidence from 29 randomized controlled trials, they recognized a number of treatment options in addition to surgery.  Though surgical methods remain the gold standard in the treatment of high-risk BCC cases, they also listed PDT as among the “suitable alternate treatment options for appropriately selected primary low-risk lesions”, as reported online ahead-of-print in the 15 April 2014 issue of the American Journal of Clinical Dermatology.

How about the cost of PDT compared to imiquimod immunotherapy?  Researchers at Maastricht University Medical Centre in Maastricht, The Netherlands, recently sought to answer this question.  They cited evidence that the clinical effectiveness of imiquimod was superior to that of PDT for the treatment of superficial BCC.   They then conducted a 12-month study which showed that imiquimod and topical fluorouracil (5-FU) were more cost-effective compared to PDT that used methyl aminolevulinate (MAL) as a topical photosensitizing agent.  “Hence, substituting MAL-PDT with either imiquimod or topical fluorouracil results in cost savings although these savings will be larger for topical fluorouracil than for imiquimod,” the researchers conclude online ahead-of-print in the 21 April 2014 British Journal of Dermatology.

Despite these findings, many BCC patients are still more willing to pay for the PDT approach due to the generally more favorable tolerability of the treatment.  Although all three treatments may produce some burning or stinging sensations in the skin, topical 5-FU may result in more prolonged vulnerability to sunburn. Moreover, after five to ten days of treatment with topical 5-FU, the sun-damaged parts of treated skin can become red and irritated.  With imiquimod, thickening or hardening of the skin can occur, as well as peeling, crusting and flaking; furthermore, changes in skin color that may not go away.

When surgery or radiotherapy are deemed impractical or less appropriate, BCC patients typically will be treated with either PDT, topical imiquimod, or topical 5-FU.  All three treatments are quite suitable for patients with low-risk BCCs, and many dermatologists prefer to rotate them if side effects arise.  There is also the possibility that PDT and imiquimod can be combined for more effective outcomes and shorter treatment periods.  Meanwhile, surgery and radiotherapy are still considered better for high-risk BCC situations as they typically result in more complete elimination of this all-too-common skin cancer.