Surgery has long been regarded as the only effective treatment for cancer of the pancreas. Unfortunately, surgery is not an option for eight out of every ten cases of pancreatic cancer. Most of these patients have extensive metastases, which helps explain why pancreatic cancer is among the deadliest of all cancers. 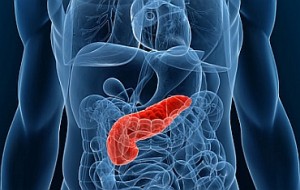 Unfortunately, chemotherapy and radiotherapy are almost always ineffective against the disease. These treatments may be able to curb the progression of the cancer, but they cannot stop it from eventually stealing away life. The cancer’s well-documented resistance to conventional treatments, along with its already advanced stage at the time of diagnosis, has helped fuel a furious search for innovative treatment strategies.

One such strategy is the light-based approach known as photodynamic therapy (PDT). This approach utilizes a light-sensitizing substance, or photosensitizer, that preferentially accumulates in abnormal or mutated cells. Upon exposure to visible light, the photosensitizer generates reactive oxygen molecules that damage and ultimately destroy the tumor.

A Landmark Study in London

PDT’s first trial run with pancreatic cancer took place in 2002, when Dr. Stephen Bown and colleagues at the National Medical Laser Centre in London (UK) reported on a small clinical trial involving 16 patients with pancreatic cancer. The researchers were able to document that pancreatic tumors were indeed destroyed by PDT.

The study’s key findings were as follows:

This was the first published report on PDT for pancreatic cancer. The researchers also noted that the tumor was able to grow back around the edges of the PDT-treated area. They proposed that future studies should extend the treated area beyond the tumor margins identified on the pretreatment scans.

Dr. Bown’s team further proposed that PDT may be effective against localized tumors for patients who are poor candidates for surgery, or those for whom the location of the tumor makes surgery inappropriate. “These promising early results justify larger trials to assess PDT either as a single therapy or in combination with chemotherapy and/or radiotherapy,” the authors concluded in their earlier report in the April 2002 issue of Gut.

As we noted above, pancreatic cancer is extremely difficult to treat, in part because surgery to remove malignant tissue from the pancreas is often not possible. PDT offers a new way of treating these inoperable cases.

This year, Dr. Bown and an international team of scientists reported on a clinical trial of 15 patients with locally advanced pancreatic cancer. The investigators were from University College London (UK), Darmouth College (USA), and Harvard Medical School’s Wellman Center for Photomedicine (USA). This trial used verteporfin (trade name Visudyne) as the photosensitizer for PDT of pancreatic cancer that could not be removed by surgery.

The researchers chose verteporfin-PDT because it appears to have fewer side effects compared to PDT protocols that have utilized other photosensitizers. The primary objective was to determine whether verteporfin-PDT is a safe treatment for these patients.

One hour after the verteporfin injection, the doctor aimed a low-power, red laser light at the pancreatic tumor. This was accomplished by passing fiberoptics (light fibers) through the skin and into the pancreatic tumor with the help of ultrasound or a CT scan to guide the placement of the fibers. In principle, the laser light activates the drug, which subsequently destroys the tumor cells.

This study had an exploratory aspect to it in that different amounts of light were tried. Of the 15 people in the trial, 13 had one fiber inserted; the first few received a small dose of laser light, the next few received more laser light, and so on until the right “light dose” was established. Of the two remaining people, one received two light fibers while the last person had three light fibers inserted.

In this clinical study, very few side effects were reported for the verteporfin-PDT. Only three people in the study reported mild to moderate belly aches after treatment, and the discomfort was easily cleared by taking painkillers. The average length of survival time was 15.5 months, as reported online ahead-of-print in the 25 February 2014 British Journal of Cancer.

The new findings suggest that verteporfin-PDT can be safely administered to people with pancreatic cancer that had spread to the surrounding body tissues. Subsequently, the same research team also showed that the verteporfin-PDT can be delivered with a much shorter drug-light interval and with less photosensitivity than with PDT protocols that used the older photosensitizers.

A shorter drug-light interval means that less times is needed for the photosensitizing agent to accumulate in the tumor.  This advantage could make verteporfin-PDT a more practical and desirable approach for physicians who do not want to wait for several hours for the agent to perform its photodynamic duty, as reported in the April 2014 issue of Physics in Medicine and Biology.