Liver cancer, also known as hepatocellular carcinoma, is not very common in Europe and North America, and yet it is one of the most common and deadly cancers worldwide. Liver cancer is now the fifth most common form of cancer and the third leading cause of cancer-related death globally.  It is rarely detected early and, at the time of diagnosis, it has often already grown or spread into several parts of the liver. This makes the disease very difficult to treat with surgery alone, and it is usually fatal within a few months of diagnosis. 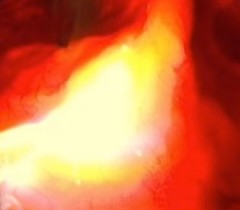 One way to improve the diagnosis may be through the light-based approach known as photodynamic diagnosis or photodiagnosis (PDD).  In its simplest form, PDD entails administering a suitable photosensitizer, illuminating the suspicious tissue with light, then observing for areas of reddish fluorescence. Though the fluorescent signal is usually weak, detection can be enhanced with the help of image intensifiers and specially designed video cameras, as well as with other types of sophisticated technology.

Recently, PDD (using 5-ALA as a photosensitizer) was shown to be quite effective in the detection of malignant liver tumors and residual disease during surgery.  The method was able to better detect residual liver cancer and bile leakage at the surgical cut surface of the remaining liver.

“This procedure may provide greater sensitivity than the conventional procedure,” the researchers wrote. “Furthermore, 5-ALA-mediated PDD can ensure histological clearance regardless of the resection margin and preserve as much liver parenchyma as possible in patients with impaired liver function.”  This study’s findings were published online ahead-of-print in the February 2014 World Journal of Surgery.

The first published clinical study of photodynamic therapy (PDT) for liver cancer was recently reported in the March 2013 issue of Photochemical & Photobiological Sciences, the official journal of the European Photochemistry Association and the European Society for Photobiology.  The researchers were interested in testing whether PDT could improve the the prognosis of patients with hepatocellular carcinoma causing obstructive jaundice (i.e., tumors blocking the bile ducts within the liver).  The prognosis for these patients is dismal, because effective biliary drainage is difficult and often leads to complications.

The study’s aim was to assess the safety and efficacy of PDT in 11 patients with inoperable HCC that had invaded the bile ducts.  These patients were enrolled at the Samsung Medical Center, which is based  at Sungkyunkwan University School of Medicine in Seoul, South Korea.  PDT and biliary drainages were performed in all patients, and all 11 patients had a successful PDT experience.

Jaundice improved in seven out of ten patients who had shown evidence of jaundice before PDT.  Hemobilia (bleeding into the biliary tree), which had developed in six cases, was effectively controlled by PDT, and there were no complications from the treatment.  The average survival for this pilot study group was 140.5 days. The researchers concluded that “PDT controlled hemobilia associated with bile duct invasion of HCC and could be an effective treatment option in these patients.”

Recent innovations in PDT for liver cancer include the use of nanotechnology to further improve deliver of the photosensitizer to the target tissues in the liver.  Scientists at the National Research Center in Cairo, Egypt, encapsulated the photosensitizer in a biocompatible matrix consisting of polymeric nanoparticles.  This resulted in the preferential killing of both breast cancer cells and liver cancer cells (hepatocellular carcinoma cells, HepG2) as reported in the May 2013 issue of Photodiagnosis and Photodynamic Therapy.