Stomach cancer is the second leading cause of cancer deaths worldwide. Each year, over one million people are diagnosed with this dreaded malignancy, and in many cases the treatment involves removing all or most of the stomach. With a five-year survival rate of only 22%, it’s no wonder that so many patients are actively searching for more effective ways to treat the disease.

Scientists believe that damaged DNA in the stomach leads to the cancer, and that many cases are linked with an infection by a type of bacteria called Helicobacter pylori or H. pylori. Smoking, alcohol, obesity and foods high in salt and nitrates will all further boost the risk of stomach cancer, while fruits and vegetables appear to have a protective effect.

In order to diagnose stomach cancer, the most common method used is endoscopy. This method enables the physician to look inside the stomach as well as other open cavities such as the colon and bladder. The endoscope is a thin, flexible, lighted tube with a small light and video camera attached on the end.

By passing the endoscope through the patient’s mouth and down the throat, physicians can view the lining of the esophagus, stomach, and uppermost part of the small intestine.  A biopsy of any abnormal tissue can be taken by using instruments that are passed through the endoscope.

Endoscopy can also be used as part of an imaging technique known as endoscopic ultrasound. This test is particularly helpful for seeing how far a cancer may have spread into the wall of the stomach, to nearby tissues, and to nearby lymph nodes. Endoscopy can also be used for treating the disease surgically. Recently, a number of new endoscopic treatments for early-stage stomach cancer have been developed.

With photodynamic methods, the early detection and early treatment of stomach cancer become quite feasible. Photodynamic therapy (PDT) involves the use of photosensitizing (light-sensitizing) agents in the treatment of cancer and other diseases. These agents absorb and transmit light’s energy in order to destroy diseased cells. Light is delivered through the endoscopic method described above.

At the same time, photodynamic diagnosis (photodiagnosis or PDD) exploits the same principle. The photosensitizer becomes concentrated in the tumor but this time creates fluorescence, enabling detection of the disease upon exposure to light.  In Japan, for example, PDD is approved as a method for detecting early-stage lung tumors. There is increasing evidence that the PDD/PDT combination may work very well as a non-invasive endoscopic approach to early-stage stomach cancer. 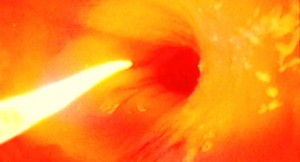 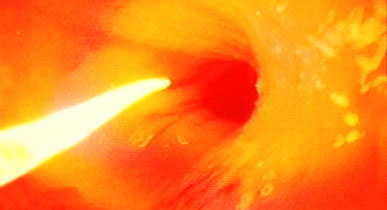 Insights from a Japanese Study

Dr. Tetsuya Nakamura and colleagues from Dokkyo Medical University School of Medicine in Japan have been using PDT as a treatment for inoperable stomach cancer since 1988. In 2008, they developed a novel high-resolution magnifying videoendoscope called the XG-0001 (by Fujifilm in Tokyo, Japan), which is capable of both PDD and PDT. The optical magnification rate of the XG-0001 is up to 135 times on a 19-inch high-definition color monitor.

Nakamura’s team recently reported on five consecutive patients with early-stage stomach cancer who were not suitable for surgery or other endoscopic treatments. These patients had complicated health issues, such as heart failure and kidney failure. Before PDD and PDT, careful endoscopic examinations were performed, and biopsies of the stomach lesions were carried out.

In this study, PDT was performed after the administration of two different photosensitizing agents: 5-ALA (for PDD) and Photofrin (for PDT). Photofrin-PDT has been approved in Japan for the treatment of superficial early-stage gastric cancer, and the treatment is covered by Japan’s public health insurance system.

Although this was a very small study, the efficacy of Photofrin-PDT was suggested by the complete elimination of 5 out of 7 malignant tumors, or a complete response rate of about 71%. This result is similar to that of previous PDT studies. Moreover, all of the patients lived for at least five years after PDT, and they had maintained a good quality of life.

As noted in the preceding section, PDT has been approved in Japan for stomach cancer and various other cancers.  The Japanese National Health Insurance system now provides coverage for the photodynamic treatment of early-stage superficial type esophageal and gastric cancers (stomach and duodenal cancers), early-stage uterine cervical cancers and dysplasia, and early and advanced lung cancer.

Not surprisingly, a great deal of PDT research is taking place in Japan at this time, and many inspiring case reports have been published as well. As an example, medical researchers from Japan’s Dokkyo Medical University School of Medicine recently reported on the efficacy of PDT using Laserphyrin® for a case of inoperable stomach cancer. The term “palliative” means that the treatment is not intended to cure, but rather to help improve the symptoms associated with terminal cancer.

Though anecdotal reports are not considered to be “hard” evidence, such case reports can often point the way to potential breakthroughs. This particular case involved an 87-year-old-man, a diabetic with histories of stroke, heart attack and kidney damage (diabetic nephropathy). In 2007, the patient was diagnosed with advanced stomach cancer but was unable to undergo surgery and chemotherapy due to his poor physical condition and compromised kidney function.

In 2009, the patient was treated with four courses of PDT, in conjunction with photodynamic diagnosis (for monitoring purposes) over the course of two years. Despite the massive size of his stomach cancer, the disease was successfully treated with PDT, without any serious complications. He was then able to enjoy a good quality of life and consume food until his eventual death due to natural causes four years after the diagnosis.

The researchers concluded that Laserphyrin-PDT is a safe and effective treatment for advanced-aged patients suffering from inoperable stomach cancer, as reported in the 30 September 2014 issue of Laser Therapy.   Although Laserphyrin-PDT is not yet approved in Japan, the report by Dr. Nakamura’s team (see previous section) indicated that this treatment may eventually replace Photofrin-PDT because of Laserphyrin’s better tolerability compared to Photofrin.