Lung cancer is a disease in which the cells of lung tissues divide and grow at a much faster rate than normal cells, eventually leading to the formation of tumors.  Lung cancer is the most commonly diagnosed cancer worldwide (aside from skin cancer). According to the International Agency for Research on Cancer, nearly 2 million lung cancer diagnoses are made each year, and 1.6 million deaths are attributed annually to the disease.  About one in every five cancer deaths—both in Europe and globally—are due to lung cancer. 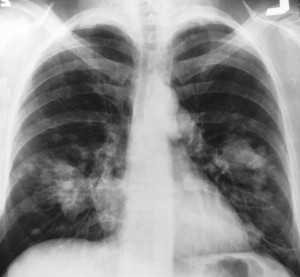 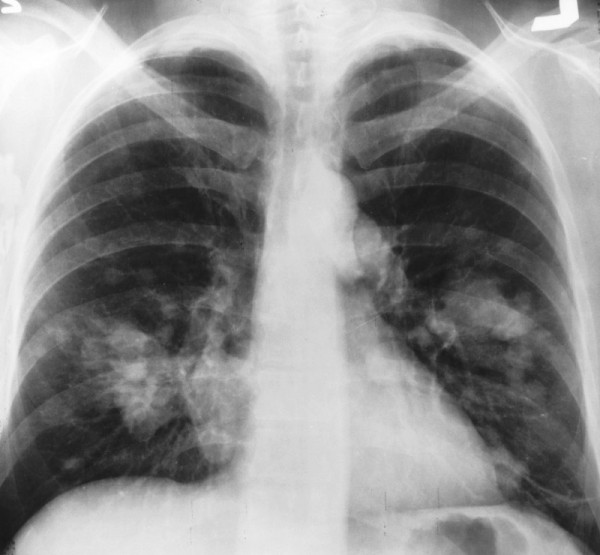 An x-ray image of a chest. Both sides of the lungs are visible, and there is a growth on the left side of the lung, which could be lung cancer. Image courtesy of Wikimedia Commons and the US National Cancer Institute.

Lung cancer was one of the first conditions to which photodynamic therapy, or PDT, was applied in the early 1980s. Initially, only patients with advanced inoperable lung cancer and major obstructions of the airways (bronchial passages) were given the new light-based treatment, the primary goal being the relief of airway obstruction and easing of symptoms. In the past few decades, however, the scope of treatment has broadened, and oncologists have come to accept PDT as a viable option for the treatment of several types of lung cancer.

When it comes to lung cancer, PDT is mainly effective against malignancies that arise in the broncho-pulmonary area or in central airways. These are also classified as bronchogenic carcinomas or central lung cancers. The results have been highly favorable for early-stage squamous-cell lung cancers in this central region of the lungs.

Scientists from First Pavlov State Medical University in Saint-Petersburg, Russia, recently reported on findings from a randomized clinical trial in which they assessed effectiveness and safety of neoadjuvant PDT and chemotherapy as well as possibility for further surgery for locally advanced non-small cell lung cancer (NSCLC).  The term neoadjuvant means that the treatments were given before surgery in order to improve the chances of successful surgery.  The study enrolled lung cancer patients who were not initially eligible for surgery but might later be considered as surgery candidates following neoadjuvant PDT and chemotherapy.

In this study, patients with stage IIIA and IIIB central NSCLC were randomly assigned to receive either neoadjuvant chemotherapy and endobronchial PDT or chemotherapy alone followed by surgery.  PDT was performed with the photosensitizer agent chlorine E6 and laser light before each of the three courses of chemotherapy.

Complete surgical treatments were significantly higher among patients receiving PDT than among those who did not receive PDT.  Thus, this clinical trial demonstrated that “neoadjuvant PDT along with chemotherapy is effective, safe and it makes possible to convert to surgery candidates and to improve resection completeness in stage III central NSCLC patients”, as reported online ahead-of-print in the 3 April 2014 issue of Photodiagnosis and Photodynamic Therapy.

Another recent report documented the successful treatment of a central lung cancer.  The case involved a squamous cell carcinoma that was blocking the left upper lobe bronchus.  The medical team used a minimally invasive approach that included PDT.  Using this “multimodal endobronchial treatment”, the physicians were able to “cure” the lung cancer without a thoracotomy—that is, a surgical cut which surgeons routinely make to open the chest wall for treating this type of lung cancer.  The authors report that lung function was well preserved, and no recurrence was found after more than five years, as reported in the 15 May 2014 issue of Respiration.