Sometimes what doctors call “cancer” actually consists of many different types of the disease. This is certainly the case with head and neck cancer, a label that can include tumors found in the sinuses, nose, mouth, voice box (larynx), throat (nasopharynx, hypopharynx and oropharynx), parts of the ear, and neck.

Head and neck tumors most often arise in mucosal linings of the mouth, nose, and throat. These tumors may spread locally, but most do not metastasize. Such tumors are feared mainly because they can limit an individual’s ability to eat, drink, and breathe.

Two out of every three cases of head and neck cancer are diagnosed with locally advanced disease, and in these unfortunate cases, recurrence rates have remained quite high for the past four decades, at about 65%. Those tumors that do recur or metastasize can be very aggressive, and are often described as incurable.

As a single group, head and neck carcinoma ranks fifth in incidence among all cancer types worldwide and accounts for well over half a million new cases each year. The highest incidence rates are found in India, Hong Kong, Italy, France, Spain, Central and Eastern Europe, Brazil, and among African Americans in the Unites States.

Many cases of advanced HNSCC may respond well to treatment with chemotherapy; however, short-term toxicity and long-term side effects continue to be a major problem. Surgery can result in the patient’s impaired ability to eat or speak normally. Chewing and swallowing can become extremely difficult, ultimately impacting one’s nutritional status and quality of life.

In addition, a patient with HNSCC may look different after surgery, with the face and neck often appearing swollen, though this swelling typically goes away within a few weeks. And if lymph nodes are removed, the flow of lymph in the surgical area may be slower, causing lymph to collect in the surrounding tissues, leading to additional swelling. In some cases, the swelling may persist for a long while.

In the days following a laryngectomy (surgery to remove the larynx) or other surgery in the neck, the neck and throat areas may feel numb or somewhat painful because nerves have been cut. In addition, if lymph nodes in the neck have been removed, the neck and shoulders can become weak, stiff, and achy.

Patients who receive radiotherapy to the head and neck may experience redness, irritation, and sores in the mouth (oral mucositis). Other adverse effects may include a dry mouth, thickened saliva, difficulty in swallowing, loss of taste, earaches, or nausea. The changes in taste can decrease appetite and affect nutrition, which in turn can exacerbate other symptoms.

Some patients may also experience swelling or drooping of the skin under the chin, as well as undesirable changes in the texture of the skin, such as wrinkling, toughness, stiffening of the jaw, or premature aging. With recurring tumors of the head and neck, chemotherapy is often ineffective, and these treatments are accompanied by a host of toxic side effects as well.

Photodynamic therapy, or PDT, has attracted increasing interest from the medical-scientific community. This approach entails the use of a photosensitizer, an agent that absorbs and transmits light’s energy in order to destroy abnormal or diseased cells. The combination of light and oxygen enables the photosensitizer to play a major role in the treatment of malignant or benign diseases. 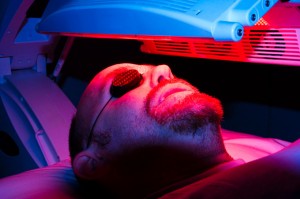 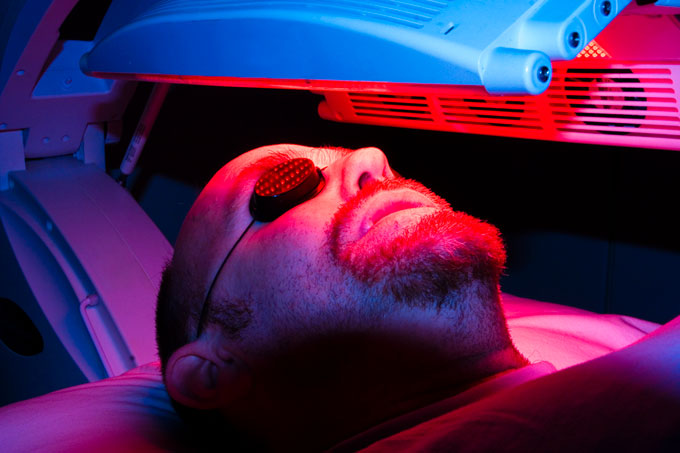 The photosensitizer for head and neck cancer is given by intravenous infusion. The photosensitizer selectively accumulates in the abnormal or diseased tissues, before being activated at the site of action by fiber-optic illumination, usually with laser light.

Photodynamic treatments offer substantial advantages over radiation treatments, another very common strategy for HNSCC. Unlike radiotherapy, PDT’s mechanism for tumor destruction is not dependent on DNA damage. This decreases the chances of treatment resistance (as well as cross-resistance with chemotherapy) and also eliminates the chance of delayed adverse effects, such as developing a second cancer.

The use of photomedicine presents a number of possibilities for improving survival and quality of life in these patients. Although multiple rounds of PDT are often needed, the side effects are much less severe than those observed with the three conventional treatments—surgery, radiotherapy, and chemotherapy.

PDT has shown some major advantages over the conventional treatment of head and neck tumors—beginning with the ability to help preserve normal tissue, as well as the vital functions of speech and swallowing. Moreover, PDT can eliminate tu mor sthat are resistant to both chemotherapy and radiotherapy—a common problem with recurrent cases of head and neck tumors.

What follows are a few examples from published studies of using PDT for head and neck cancer. In a clinical case series study of 133 patients with primary or recurrent laryngeal carcinomas (cancers of the larynx, or voice box), a single PDT treatment led to a 90% cure rate after five years.

The researchers also observed a second group of 138 patients who had undergone PDT for oral cancer. All of these patients achieved complete clinical responses and were still clear of oral cancer after five years. For patients with more advanced-stage oral cancer, a single PDT treatment again led to complete remission, with a 100% cure rate after three years of observation, as reported in a 2006 issue of Lasers in Surgery and Medicine.

Throughout the world, hundreds of individuals with early-stage cancers of the larynx, pharynx, nasopharynx, and oral cavity have been treated with PDT—all with similarly impressive and well-documented results. The chances of having a recurrence are extremely low. If a recurrence does happen, it can often be successfully treated with either repeat PDT or surgery.

These patients underwent a single PDT session, with the light treatment delivered four days after administration of the photosensitizer, in this case temoporfin. In 43% of patients, PDT resulted in complete elimination of the tumor, and the remaining lesions were reduced in size by at least 50%. At the same time, more than half of the patients reported significant improvements in their quality of life, as reported in the medical journal, Head and Neck.

These findings are quite striking, given that all the patients who participated in this clinical trial had been labeled “incurable.” Other studies might well have labeled these same patients “terminal,” the implication being that they would surely die from the disease despite any treatments used.