Bladder cancer has been called the world’s most expensive cancer, and for good reason: It has the highest lifetime treatment costs per patient of any cancer. Even after successful surgery, the disease is likely to come back very soon, resulting in yet more treatment and more expense. Based on recent estimates, the world market for treating bladder cancer is projected to reach $544.4 million by 2015.

A recent update published in European Urology paints an alarming picture. Treatment outcomes for bladder cancer have changed little for three decades, despite the huge costs incurred and despite significant improvements in five-year survival rates for cancers of the prostate and kidney during this same period.

Bladder cancer is a disease in which abnormal cells multiply in an out-of-control manner in the bladder tissues. When first diagnosed, most cases are classified as non-muscle invasive bladder cancer, or NMIBC. The term “superficial” bladder cancer is also used because the tumors are mostly confined to the internal lining of the bladder and have not yet spread to the muscular layer of the organ. 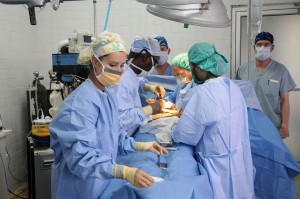 NMIBC is actually the earliest stage of bladder cancer. After the first treatment, up to 80% of all cases will recur within five years, though most of these recurrences occur in the first two years. Approximately 20% of tumors will become invasive and are therefore considered at high risk of becoming metastatic. If the tumor has invaded other parts of the bladder—notably the muscle—it is virtually impossible to remove the cancer with surgery alone.

For these and other reasons, the standard treatment for NMIBC usually consists of surgery plus either chemotherapy or immunotherapy (stimulating the immune system in a very specific way). Though immunotherapy is regarded as the most effective therapy for preventing recurrences, this approach fails in at least one out of every three patients. Another 40% of patients who initially respond to immunotherapy will eventually have a relapse.

Recurrences and the Limits of Surgery

Why does bladder cancer recur so often? There are several explanations. First, the substances that cause the cancer to develop affect the entire lining of the bladder. After one tumor is removed, another tumor may develop in another part of the bladder.

A second reason for the high recurrence rate among bladder cancer patients is incomplete surgery—that is, surgeons often miss some the cancer in the lining. The existence of multiple small lesions in the bladder, as well as the tumor grade and depth of tumor invasion, can strongly impact the risk of a relapse. (Note: These small flat lesions are extremely difficult to detect but can be seen using photodynamic diagnosis techniques or fluorescence cystoscopy…READ MORE)

Third, surgery itself may promote a recurrence by creating inflammation and unleashing growth factors that are needed to heal the surgical wound. This surge of inflammatory and growth factors can stimulate the proliferation of any cancer cells that may be in the vicinity. Eventually, this can lead to the growth of new tumors.

Despite these limitations, many oncologists consider the surgery known as radical cystectomy to be the best treatment for high-risk NMIBC cases—including those that have relapsed after immunotherapy. This surgery is indeed “radical”: it entails removal of the entire bladder, as well as nearby lymph nodes, part of the urethra, and nearby organs and structures that may contain cancer cells. In women, the cervix, uterus, ovaries, fallopian tubes, and part of the vagina are also removed. Men will typically lose their prostate, the seminal vesicles, and part of the vas deferens.

Needless to say, this kind of major surgery has a huge downside, notably a tremendous decline in one’s quality of life. Some patients occasionally refuse to undergo such an aggressive surgery because of the loss of physical functioning that occurs afterward. Other people may not be suitable for the operation due to individual factors such as poor physical condition.

One option that bladder cancer patients have to preserve the bladder is photodynamic therapy, or PDT, a minimally invasive therapeutic modality that has been approved for several cancers. PDT involves the use of light-triggered chemical reactions generated through the interplay of photosensitizing agents, light, and oxygen. The best photosensitizing agents are those that concentrate in tumors; these agents absorb and transmit light energy in ways that ultimately destroy the cancer cells.

Given the bladder’s hollow structure, it should come as no surprise that scientists interested in targeted light-based therapies would want to consider PDT for bladder cancer. There are four other reasons PDT is an ideal target organ for PDT in this situation:

Even though previous PDT studies had shown some advantages (for example, it is well tolerated compared to immunotherapy and chemotherapy), photodynamic strategies have rarely been employed for the treatment of NMIBC. Part of the reason for this slow acceptance is that the photosensitizers have not been powerful enough. Others resulted in excessive skin sensitivity to light. Now, however, that situation is about to change, thanks to the introduction of a new photosensitizer known as Bremachlorin®.

Setting the Stage with a Korean Study

Bremachlorin® shows a unique ability to enter living cells with ease and accumulates far more strongly in tumor tissues than in the surrounding healthy tissues. This agent is currently in the process of rigorous scientific evaluation for eventual clinical use in the European Union.

Bremachlorin® is activated by a specific wavelength of light, causing the tumor’s destruction and reprogramming the immune system in the process. This activation of the anti-cancer immune defenses along with other effects described below help account for much of the excitement now surrounding this unique photosensitizer.

Until recently, there were no published research on the effects of Bremachlorin-PDT for bladder cancer. To test the safety and efficacy of this approach, a prospective clinical study was carried out in patients with recurrent NMIBC who had refused to undergo radical cystectomy. This research was conducted by scientists at Yonsei University College of Medicine in Seoul (South Korea).

Between July 2009 and December 2011, Bremachlorin-PDT was performed in 34 patients with NMIBC. The agent was injected intravenously two to three hours before receiving the light treatment. After complete transurethral resection (removing any visible bladder tumors through a cystoscope), the scope was placed in the bladder for laser treatment, which lasted up to 30 minutes.

In order to assess the rate of recurrences following PDT, the patients were observed at regular intervals for up to nearly three years.  The efficacy of the treatment was determined with various sophisticated methods and ultimately defined as the number of patients who were “tumor free” after the initial PDT session.

The findings were extraordinary from the standpoint of statistically based expectations:

These findings were unchanged after taking into account factors such as on tumor size and treatment history, either of which could have affected the prognosis. A commentary on the study, published in the current issue of Urologic Oncology, describes these results as “rather impressive”.

Moreover, no evidence of adverse effects was reported following the photodynamic treatment. The researchers explain this advantage partly in terms of the composition of Bremachlorin: it is a derivative of chlorophyll, the green pigment naturally found in plants. According to the authors, the low rate of adverse side effects is a “great advantage of using [Bremachlorin-PDT] compared to other photosensitizers.”

Thus it would appear that Bremachlorin-PDT is “a safe, effective treatment for nonmuscle invasive bladder cancer”, in particular for those patients who refuse to undergo radical surgery and for whom immunotherapy has either failed or cannot be tolerated. The original study was published in the October 2013 Journal of Urology, and a highly favorable commentary on the study appears in the January 2015 issue of Urologic Oncology.

Photodiagnosis (PDD) is considered a more complete method of diagnosis compared to conventional cystoscopy, the usual method of peering into the bladder for tumors. For this reason, many urologists now favor a PDD strategy called fluorescence cystoscopy.

The latter procedure entails passing an endoscope through the urethra in order to examine the interior of the bladder. The scope can then be used to guide the treatment itself—either surgery or laser therapy or some combination thereof.

Let’s consider the example of laser ablation, which basically means “zapping” the tumors with laser light once they are detected. Researchers at the Urology Centre of the Guy’s and St. Thomas’ NHS Foundation Trust in London (England) recently sought to assess the safety and effectiveness of laser ablation for NMIBC in an elderly population, either with or without PDD. Here’s what they found, as reported in a recent issue of BJU International:

This was the first clinical study to demonstrate the long-term cost-effectiveness of a combined approach using PDD with laser ablation for NMIBC. The results strongly support the use of this strategy for the treatment of NMIBC, especially in the elderly. The cost savings from adopting this photodynamic strategy could be substantial, as attested by a commentary published in the November 2014 issue of Urologic Oncology.

Why Bremachlorin-PDT Seems to Outshine the Competition

After Bremachlorin® accumulates within the tumor, light treatment is carried out, typically with laser or light-emitting diode (LED) lights, depending on the specific therapeutic situation.  The following therapeutic effects may be attributed to Bremachlorin-PDT in the context of treating cancer:

In recent years, Bremachlorin® has emerged as a popular focus for researchers interested in the use of PDT and second-generation photosensitizers for various types of cancer.  These more powerful agents are considered to be more sophisticated and better tolerated than the first-generation agents, and they may offer a wider range of applications as well.

Exploring the Versatility of Bremachlorin-PDT

Scientists at Dankook University, in Cheonan (South Korea) have studied several key aspects of Bremachlorin®, in particular its relative accumulation in the main cell structures responsible for PDT’s anticancer effects. (As with the Seoul study, the Cheonan study reported on the drug Radachlorin®, which has the same composition as Bremachlorin®. Because Bremachlorin-PDT is moving toward market authorization in the European Union, we have elected to use that term in this article.)

Their most recent laboratory findings were as follows:

By obtaining such information, medical researchers can hone in on agents and strategies that will increase the effectiveness of the treatment as well as better limiting phototoxicity (skin reactions to light) after the treatment, as reported in the 26 March 2014 issue of Photochemistry and Photobiology.

At this time, various Bremachlorin® doses and light exposures are being explored in order to determine the optimal protocols for Bremachlorin-PDT as primary and adjuvant treatments for cancer.  As a primary  treatment, this approach has been especially effective in the elimination of small tumors—and in particular, more superficial tumors or those readily exposed to laser or other light sources.

The same Korean research team has also shown that Bremachlorin-PDT can synergistically enhance the effectiveness  of platinum-based chemotherapy.  These highly toxic chemotherapy drugs are commonly used to treat many different types of cancer. Any possibility of a synergistic interaction could allow oncologists to use lower and less toxic doses of those chemotherapy drugs, thus reducing side effects while improving the tumor-killing impact of the treatment.

Speaking of synergy, it is also possible to combine PDT with natural compounds to further enhance the treatment outcome.  For example, silybin is a flavonoid compound extracted from the herb commonly known as milk thistle (Silybum marianum) and has been reported to boost the efficacy of several anticancer treatments. A recent study showed that silybin enhanced the PDT-driven impairment of migration on two bladder cell lines.  These findings suggest that this combination could bolster the results of PDT, possibly helping to block the growth of metastases from bladder cancer, as reported in the April 2014 Journal of Photochemistry and Photobiology B.