Psoriasis is an itchy, irritating, noncontagious skin condition that affects hundreds of millions of people each year.  The word “psoriasis” is derived from the Greek psora, meaning “itch.” It usually appears as a buildup of dry, rough, dead skin cells, often with raised, reddish-pink areas and an abundance of white or silvery scales. Patches of psoriasis can manifest either in a few small areas, or they can span large portions of the body—though often they form on the scalp, elbows, knees, and lower back. This chronic, irritating condition can come and go with little or no warning. 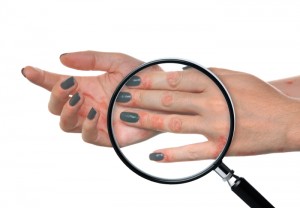 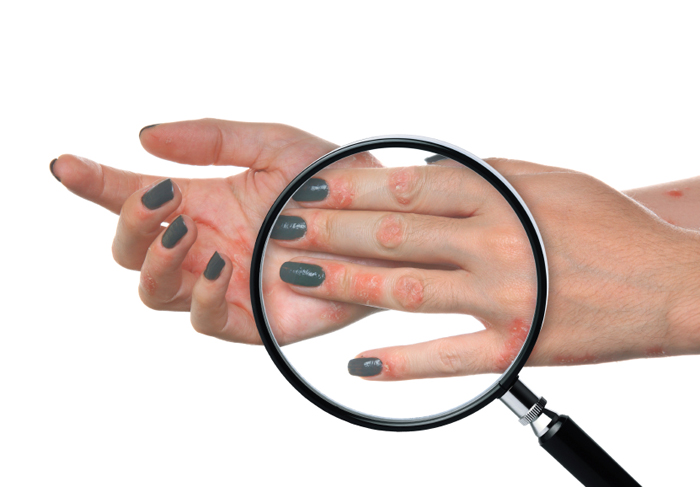 Psoriasis can occur at any age, though the average age of onset for chronic plaque psoriasis is estimated to be around 33 years old. Though the primary cause of this chronic, debilitating skin disease is unknown, it has been linked to certain abnormalities in the immune system. It is these abnormalities that give us some insight into how to best treat the disease, and how to prevent it from worsening over time. In a recent review of the different approaches to psoriasis, scientists from the ISF College of Pharmacy in Moga (Punjab), India, reported that Photodynamic Therapy, or PDT, has been used successfully for mitigating the symptoms of psoriasis for months to years. PDT involves the use of nontoxic light-sensitive compounds that are exposed selectively to light, whereupon they become toxic to diseased or abnormal cells. PDT for psoriasis showed promise in the early 1990s with reports of plaque clearance following the use of a  topical light-sensitizing substance called aminolevulinic acid, or ALA, as reported in the April 2014 issue of Critical Reviews in Therapeutic Drug Carrier Systems.

There is considerable debate, however, as to which specific PDT regimens are optimal and for which specific forms of psoriasis. Two other reviews of the evidence have provided additional insights into the usefulness of PDT for psoriasis.  In one of these, researchers from Kuwait University in Al-jabriya, Kuwait, reported that PDT has low efficacy in treating localized psoriasis when compared to other light-based therapies, namely narrow-band ultraviolet B and topical psoralen plus ultraviolet A (PUVA). On the other hand, PDT could prove helpful in cases in which  large portions of the body are affected by psoriasis. To provide a more comprehensive assessment of PDT’s potential, research scientists at UCLA’s David Geffen School of Medicine in Los Angeles, California (USA), conducted a systematic search of clinical studies focusing on PDT and psoriasis.  Systematic reviews of this kind are widely viewed as the best way to obtain a global picture of the evidence to date for a specific issue. Based on their careful assessment, the UCLA scientists concluded that the specific photosensitizer selected for PDT is the key to success.  Whereas topical ALA-PDT failed to show a consistently favorable response, other more recently developed photosensitizers—such as topical hypericin, methylene blue, and verteporfin—have demonstrated strong efficacy and are far better tolerated than topical ALA.

The study’s overall conclusion was that, although PUVA and other phototherapy approaches will continue to play a dominant role in psoriasis treatment, PDT may offer a reasonable and responsible alternative, particularly when the newer or second-generation photosensitizers are utilized.  With the right choice of a photosensitizer (as well as the right light source), PDT offers a promising treatment option, especially for the non-localized form of psoriasis, as the authors state online ahead-of-print in the June 2014 Journal of Dermatological Treatment.