The common condition known as “heartburn” results in a burning pain or discomfort that typically moves from the stomach to the chest or even up to the throat. This occurs when fluid in the stomach splashes back up into the esophagus, the long feeding tube that connects the stomach and throat. This frequent “reflux” phenomenon eventually alters and mutates the cells of the esophagus, creating a condition called Barrett’s Esophagus. Once diagnosed, the individual with Barrett’s Esophagus has an up to 125-fold increased risk of developing esophageal cancer.

Esophageal cancer is the eighth most common cancer worldwide and the sixth most common cause of death from cancer, with an extremely poor survival rate in most cases. It continues to be among the fastest increasing cancer types in the United States and in several European countries. This cancer is notoriously aggressive and resistant to conventional treatments, making it a tremendous challenge for modern medicine.

Photodynamic therapy, or PDT, has received much attention as a promising treatment for esophageal cancer. This approach entails the use of light-triggered chemical reactions that are mediated through the interaction of photosensitizing agents, light, and oxygen. The photosensitizer is a substance that absorbs and transmits light’s energy in order to destroy abnormal or diseased cells.

The photosensitizer for esophageal cancer is given by intravenous infusion. The photosensitizer selectively accumulates in the abnormal or diseased tissues, before being activated at the site of action by laser light. Because the photosensitizer is preferentially absorbed by malignant tissue, and because the light source is directly targeted on the lesion or tumor area, PDT damages the tumor while having very little effect on adjacent healthy tissues and body structures. 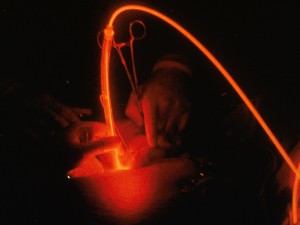 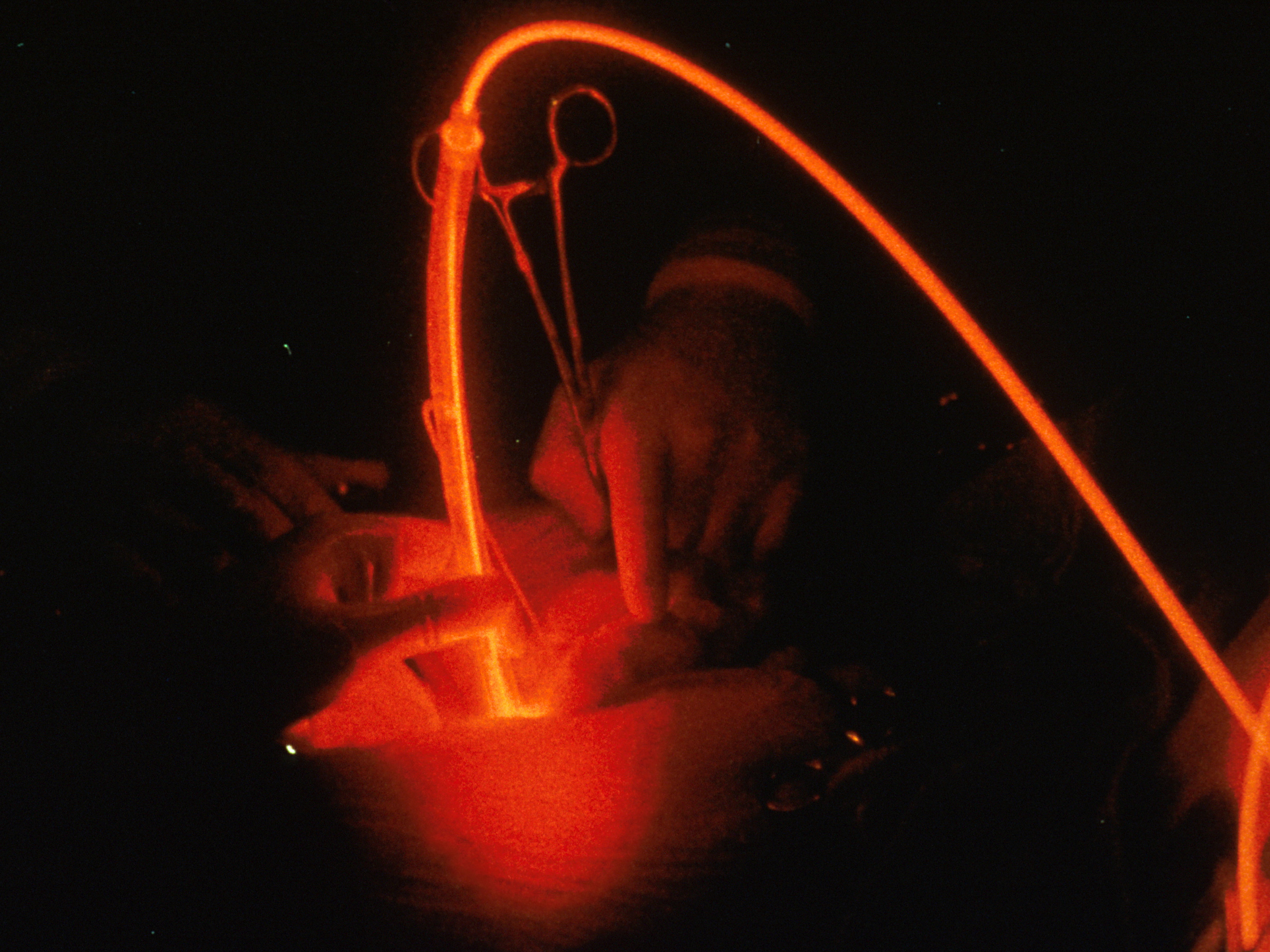 Based on the experience of many Japanese and some European clinics, PDT has proven to be a minimally invasive treatment with tremendous promise. It can be applied before or after conventional surgery, radiotherapy, or chemotherapy, without compromising these treatments or being compromised itself. PDT can also be repeated many times without causing complications or resistance to the treatment (in sharp contrast with radiotherapy and chemotherapy).

PDT offers substantial advantages over radiation treatments, another very common strategy. Unlike radiotherapy, PDT’s mechanism for tumor destruction is not dependent on DNA damage. This decreases the chances of treatment resistance (as well as cross-resistance with chemotherapy) and also eliminates the chance of delayed adverse effects, such as developing a second cancer.

At this time, PDT is among the best studied treatments for Barrett’s esophagus, because it can be used to directly eliminate any precancerous or cancerous growth manifesting on the mucosal lining of the esophagus. The esophagus is a hollow structure, so its lining is readily accessible by light treatment.

The PDT procedure is performed using an endoscope, a flexible scope that allows the physician to peer down the esophagus and to take biopsies of anything that appears suspicious. The PDT can be administered upon spotting the abnormal tissue. This logical approach enables the physician to actually see what it is he or she is treating.

Historically, the standard treatment for Barrett’s esophagus was the surgical removal of the bottom part of the esophagus, a procedure referred to as distal esophagectomy. However, that surgery carries a number of potential complications that can seriously detract from the patient’s quality of life.  For these reasons, PDT has become an attractive treatment option for patients with Barrett’s esophagus—especially for those wishing to avoid surgery, those considered “high risk” or not well-suited for surgery, and those for whom other treatments have previously failed.

Until recently, surgery for esophageal cancer was viewed as the best way to treat the disease. However, this approach resulted in a wide range of serious complications, such as heart problems, postoperative bleeding, breathing complications, and even death in about one in 20 cases. These and other complications tend to worsen the prognosis following the operation.

Adding to the risk was the fact that many patients were elderly and therefore weak and vulnerable to the complications of surgery. Taking chemotherapy or radiotherapy prior to the surgery is a common recommendation, and yet many older patients cannot tolerate these treatments.

Against this backdrop, PDT seems to be a viable alternative. In a clinical study in Russia, esophageal cancer was successfully treated by Dr. Victor Sokolov using a number of photosensitizers, including Bremachlorin® (clinically approved in Russia as Radachlorin®), PDT was performed in 48 esophageal cancer patients (total 48 lesions) from 1992 to 2006. Complete regressions were observed in at least three out of every four the esophageal tumors, with partial regressions in one out of every four cases. The follow-up period was up to 11 years, and median survival was nearly five years—truly an exceptional result for this patient population, and a testimony to the therapeutic potential of Bremachlorin-PDT.

A growing number of oncologists are looking to PDT as a way to avoid the surgical complications mentioned above. This makes PDT an especially attractive option for many patients diagnosed with this cancer. A number of randomized clinical trials are underway to evaluate PDT in patients with Barrett’s esophagus who also had either high-grade dysplasia or superficial esophageal cancer (cancer on the outer layers of esophageal tissue), which is readily accessible to light treatment.

PDT’s Promise for the Future

The prevalence of esophageal cancer has been rising rapidly for several decades in the European Union and North America. PDT has demonstrated great promise against this condition, as well as its precursor, Barrett’s esophagus. A 2013 report for the American Society for Gastrointestinal Endoscopy confirms that PDT has successfully treated both the precancerous and early stages of esophageal cancer.

In addition, as reported in a recent issue of Clinical Endoscopy, PDT has been highly promising in cases of advanced esophageal cancer that were deemed unsuitable for surgery, or for cases of this cancer that recurred or progressed after standard chemoradiation therapy. Several clinical trials have demonstrated that PDT led to a slower progression rate in patients with advanced esophageal cancer. This approach is the logical alternative for patients who were unfit for surgery, or for those who refused to undergo the procedure.

PDT has been consistently effective in treating small esophageal tumors (i.e., less than one centimeter in diameter). For larger or more aggressive tumors, the addition of radiotherapy can bolster overall treatment responses in cases that continue to progress after PDT. Thus, the ideal approach to esophageal cancer may involve using PDT concurrently with radiotherapy.

In Japan, a laser-based approach to PDT is currently approved as a “curative treatment” for superficial esophageal cancer. While surgery continues to be a more popular treatment for this disease, there is now ample evidence to support the use of PDT as an alternative treatment and as a salvage treatment in the event that chemotherapy and radiotherapy have failed, as reported in the March 2014 Annals of Translational Medicine.

Some of the most exciting research has recently shown that PDT can be very effective in cases of recurrent esophageal cancer—that is, those cases that have come back after surgery and other treatments were used. The most recent studies of this issue were conducted at Gunma University Graduate School of Medicine in Gunma, Japan, as reported in the September 2014 issue of Photodiagnosis and Photodynamic Therapy.

To sum it all up, although surgery is still viewed as the treatment of choice for most cases of esophageal cancer, PDT represents an effective, minimally invasive treatment option. This view has been echoed by Keyvan Moghissi, MD, Director of the Yorkshire Laser Centre (UK) and current editor in chief of Photodiagnosis and Photodynamic Therapy. Based on his many years of experience with PDT for esophageal lesions, Dr. Moghissi asserts that the best indication for using PDT is early esophageal cancer for those patients who are ineligible for surgery.