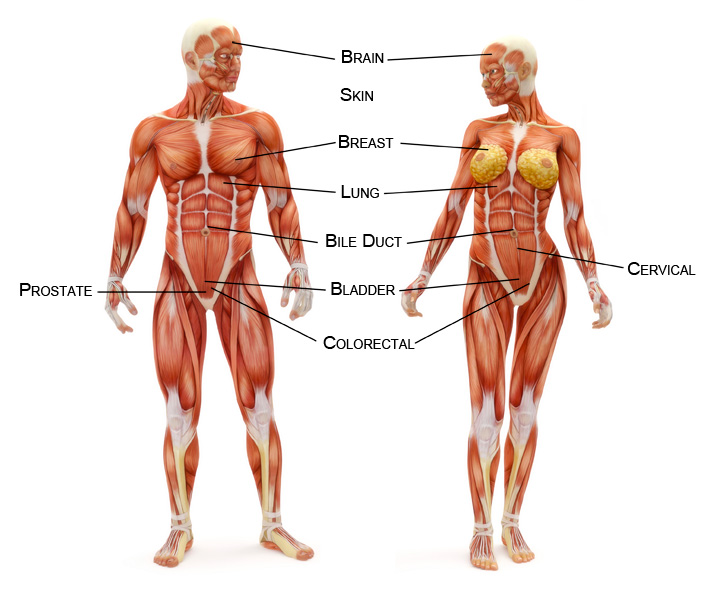 Cancer is a leading cause of death worldwide.  In 2008, cancer accounted for 7.6 million deaths, or approximately around 13% of all deaths.  Most of these deaths are linked with cancers of the lung, stomach, liver, colon and breast. Deaths from cancer on a global scale are projected to continue rising, with an estimated 13.1 million deaths in 2030.

At least 200 different cancers are known to afflict humans.  Each of these diseases originates in mutated or abnormal cells that divide and proliferate in an uncontrolled manner.  After years of this unregulated growth, the mass of cells can form into a malignant tumor, and that tumor may eventually send out cells that invade nearby parts of the body (invasive disease).  In metastatic cancer, the cells have traveled from the primary tumor through the blood and lymph system to create new tumors in organs or areas distant from the tumor, such as the brain, liver or lungs.

Only about five to ten percent of cancers are entirely hereditary.  The rest appear to result from the interactions of genes with environmental factors.  Many risk factors may play a role in the genesis of a cancer.  Examples include smoking, dietary fats, radiation, sedentary lifestyle, obesity, certain infections, and a wide range of pollutants (e.g., pesticides, dioxins, heavy metals).  If you’re genetically predisposed to a particular cancer, you may be more susceptible to that cancer if you have a plethora of cancer-related risk factors in your daily living environment.

Photoimmune Discoveries also seeks to educate the public about using natural therapies that can complement conventional treatments or in some cases even serve as an alternative to conventional treatments if those treatments have failed to bring about a remission. Examples of innovative therapies include Photodynamic Therapy (PDT),  Immuno-PDT, and Hyperthermia.  Some of these therapies, such as PDT, are accepted as standard treatment for some cancers but are considered “experimental” for others.

With a number of these innovative therapies, the basic principle is not only to attack cancer directly, but also to shift the body’s biochemical terrain in ways that curb or thwart the growth and progression of cancer.  Some treatments may be enhanced by the addition of natural agents (e.g., specific herbs and nutraceuticals) that can further discourage cancer from growing or spreading.  When it comes to natural therapies, we urge you to get help from professionals who have expertise with these particular therapies and agents.  Read more…

The PIR will seek to educate the public about diet and lifestyle factors that may play key roles in both prevention and treatment of cancer.  There is evidence that specific dietary and lifestyle habits can impede the cancer process and even improve survival after the diagnosis.  Many of the same lifestyle and environmental risk factors that support cancer prevention may also affect one’s ability to overcome cancer and stave off the disease for life.

It is important to emphasize that an anti-cancer diet and other lifestyle behaviors generally have a very wide margin of safety and thus can be implemented without the need for extensive studies, such as those needed to test the efficacy of drugs.  Evidence is strong enough to warrant implementing at least some lifestyle strategies now, knowing that they are safe, inexpensive, and have the potential to improve your quality of life and reduce your risk of developing cancer.  Read more…