Radiation treatment, or radiotherapy,  is a common cancer treatment method. It is based on ionizing radiation, which injures and destroys new cells and cancer cells alike, preventing their spread throughout the body. Unfortunately, radiotherapy is not a very specific treatment.  Normal cells, such as those that orchestrate the immune response, are also destroyed.  The effectiveness of radiation treatment strongly increases when combined with surgery or chemotherapy. 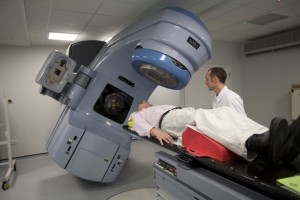 Radiotherapy is typically an external treatment modality and is used when the tumor is localized in one or several regions.  The radiation is focused and targeted, and generally high doses of radiation are applied. Nevertheless, distant metastases may undermine the effectiveness of the treatment. The recommended courses of radiotherapy may last from three to six weeks.

Radiation treatment is frequently used in the following cases:

PDT Plus Radiotherapy for Lung Cancer

A number of studies have examined the possibility of combining PDT with radiotherapy.  In a 2004 clinical trial conducted at the Department of Pulmonary Medicine at the Lungen Clinic (Lungenklinik)  in Hemer, Germany, patients with central lung cancer were treated using a combination of PDT and radiation (brachytherapy). Six weeks after PDT, the radiation treatment was given. After an average follow-up time of two years, 26 or the 32 patients were still free of residual tumor and local recurrence. The remaining six patients received a second treatment with PDT, YAG laser coagulation, or radiotherapy, and two of those patients developed metastases of the lung and lymph nodes.

All 32 patients were still alive and well at the time of the report, and only four patients had evidence of lung cancer. None had developed any severe complications. The German research team concluded that the combination of PDT and brachytherapy for treating patients with lung cancer is safe and may have superb therapeutic efficacy, as reported in the September 2004 issue of Thorax.

PDT Plus Radiotherapy for Esophageal Cancer

As expected, the complete response rate for PDT alone was nearly twice as high in the small-lesion patients compared with the larger-lesion patients (44 versus 28 percent). Of those who had a complete response, about half remained free of disease through the follow-up period, which was up to 7.5 years in some cases, as reported in the May 2000 International Journal of Radiation Oncology, Biology, Physics.

The median time it took for a recurrence of the esophageal cancer was just over four years for early-stage patients, compared to two and one-half years for later-stage patients, and just over a year for patients originally treated for recurrent tumors. Based on these findings, the investigators concluded that PDT was effective for early-stage esophageal cancer and that the addition of radiotherapy could be beneficial in patients who had not responded completely to PDT alone. The study also confirmed that PDT is less optimal against larger tumors, which of course require more light penetration.

PDT Plus Radiotherapy for Pancreatic Cancer

This was a follow-up report from an earlier clinical trial involving 16 patients, conducted by Dr. Stephen Bown and colleagues at the National Medical Laser Centre in London.  The researchers were able to document that the tumor was indeed destroyed by PDT. Over half the group (56 percent) was alive one year from the time of their diagnosis. Seven out of the 16 patients (44 percent) were alive one year following the PDT treatment, and two were still alive two years after completing PDT.

The median survival of 9.5 months compared quite well with other survival statistics for these patients.   The main difference is that PDT-treated patients experience much lower morbidity and thus a much better quality of life. These findings were originally reported in the April 2002 issue of the medical journal, Gut.

This was the first published report on PDT for pancreatic cancer. The researchers did also note that the tumor re-grew around the edges of the PDT-treated area, and they proposed that future studies should extend the treated area beyond the tumor margins identified on the pretreatment scans.   The researchers propose that the technique may be effective against localized tumors in patients who are poor candidates for surgery or in whom the location of the tumor make surgery inappropriate.

“These promising early results justify larger trials to assess PDT either as a single therapy or in combination with chemotherapy and/or radiotherapy,” Dr. Bown’s team concluded.

PDT Plus Radiotherapy for Breast Cancer

For breast tumors that are invasive or larger than two centimeters at the time of diagnosis, a combination approach of radiotherapy followed by PDT is recommended. This enables the PDT effect to go deeper than the usual 5 to 10 millimeters from the surface, and also results in a better and more selective accumulation of the photosensitizer.

For such combined treatments, the radiation dose is typically two to four times lower than the conventionally used rradiotherapy dose, and the PDT dose is only about half the standard PDT dose. These lower doses create an inflammatory response as well as suppressed proliferation of the cancer cells, resulting in tumor stabilization (no additional tumor growth).

In such situations, tumor stabilization should be viewed as a clinically significant and favorable outcome. Such a patient can live for many years without the tumor interfering with her life or causing any pain or discomfort. Many women view this option as preferable to mastectomy. To ensure long-term success, however, the combined PDT-radiation treatments must be done twice a year for many years, possibly for ten years or more.

To summarize, using PDT in tandem with radiotherapy may be viewed as a very promising treatment strategy for various cancers.  In some cases, it may even be used on a stand-alone basis, depending on the size and location of the tumor. The use of PDT alone is suitable for smaller tumors, while larger or invasive tumors would require combination treatments.